Romulus Buckle & the City of the Founders (Chronicles of the Pneumatic Zeppelin #1) by Richard Ellis Preston Jr.

Romulus Buckle & the City of the Founders (Chronicles of the Pneumatic Zeppelin #1) by Richard Ellis Preston Jr. 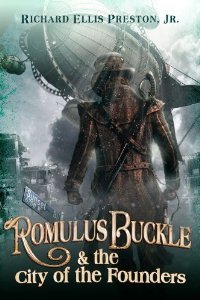 Synopsis: In a postapocalyptic world of endless snow, Captain Romulus Buckle and the stalwart crew of the Pneumatic Zeppelin must embark on a perilous mission to rescue their kidnapped leader, Balthazar Crankshaft, from the impenetrable City of the Founders. Steaming over a territory once known as Southern California — before it was devastated in the alien war — Buckle navigates his massive airship through skies infested with enemy war zeppelins and ravenous alien beasties in this swashbuckling and high-octane steampunk adventure. Life is desperate in the Snow World, and death is quick. Buckle and his ship’s company must brave poisoned wastelands of Noxious Mustard and do battle with forgewalkers, steampipers, and armored locomotives as they plunge from the skies into the underground prison warrens of the fortress city.
Captain Romulus Buckle must lead the Pneumatic Zeppelin and its crew of ne’er-do-wells on a desperate mission where he must risk everything to save Balthazar and attempt to prevent a catastrophic war that could wipe out all that is left of civilization and the entire human race.

Review: This is one of those books that take a while to get going. I can see why some reviewers say they gave up with it after the first 100 pages. But this book is worth sticking with as once you get passed the initial part there is an excellent story and characters.

The descriptions are of a high level. Most of the time this is really good as it gives you clear view of the world and what is happening in it. There were some times I felt that the description went on for too long and it hurt the pacing of the story. I didn’t really need a detailed description of every single part of the ship, its crew, where they sit etc.

The lengthy descriptions are not limited to the sights, sounds and smells of the world, but also in the narrative of the characters. Just about every part of every conversation is included. The parts that slowed down the story the most was the bridge actions. First the commanding officer will give a command (usually a ship maneuver), a crew member will then repeat the command back to the commander, then we get a description of what the crew has to do (turning valves, flicking switches etc.) the maneuver or action being carried out and finally the result of what they did. There would often be several of these commands, confirmation, carryout and maneuvers in one go, making for a couple of pages of uninteresting story which really slowed the pacing down. Although for the most part this became annoying, one nice thing about this style was during times when the crew needed to do something quickly (such as hurry to a destination for a rescue) it really increased the tension as I waited for the slow paced ship/story to get to where they needed to be and I was worried they wouldn’t make it in time.

Initially I thought there was too much world building, and this is true for the first 100 pages or so. It appears in large chucks making it hard to absorb and slowing down the pace of the story. Luckily like so much about this book once you get pass the slow part there is a much better balance.

Similarly the characters suffered at the start of the story, with all the world building going on and some part spent on action, very little background is given to the characters and we don’t really learn very much about them. But just like the story, once you get pass the first part of the book there is plenty in there. We find out a lot about the main characters past, what their thoughts and motives are, and how they develop throughout the story.

As I have already said, the pacing picks up after the first 100 pages or so, and there is a much better balance between, story, world building and characters. The length of the descriptions feels about right and we are not continually interrupted by large chucks of world building.

If you are reading this book and get to page 100 and are thinking about given up then I would urge you to stick with it, at least for another 100 pages as the book really improves after the initial slowness.

The Book Thief by Markus Zusak

A Red Herring Without Mustard by Alan Bradley


I WILL BE REVIEWING THESE BOOKS ON GOODREADS SOON!

BOOKCOVERS TO *SIGH* OVER